The new Savage MSR 15 Patrol is a step up from the many rack-grade M4 clones popular today. With an upgraded barrel featuring a 223 Wylde target chamber, 5R rifling and a Melonite QPQ finish, the rifle delivers accuracy well beyond mil-spec. A BLACKHAWK!® handguard, pistol grip and adjustable buttstock further separate the Patrol from all other MSRs.

OUT OF STOCK
$ 643.00
Notify Me When Available
Add To Wish List
Ask the Community
Add to Wishlist
Notify Me When Available
Retail Store Availability
*Please Note!! Many of our pictures are stock photo\'s provided to us by the manufacturer and do not necessarily represent the actual item being purchased. Please verify this picture accurately reflects the product described by the title and description on this page before you place your order.

The new Savage MSR 15 Patrol is a step up from the many rack-grade M4 clones popular today. With an upgraded barrel featuring a 223 Wylde target chamber, 5R rifling and a Melonite QPQ finish, the rifle delivers accuracy well beyond mil-spec. A BLACKHAWK!® handguard, pistol grip and adjustable buttstock further separate the Patrol from all other MSRs. 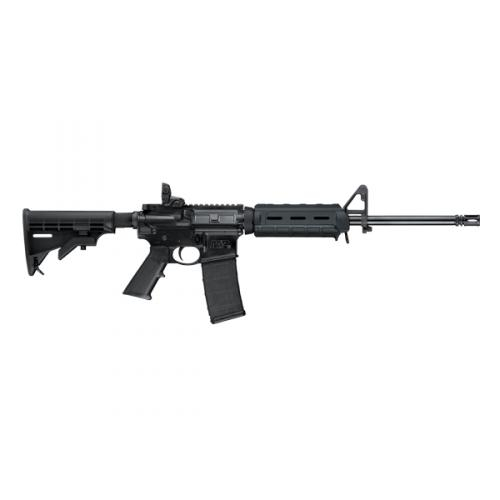 Reviewed By: Caleb E on 08/22/2018
Rating:     5 of 5 Stars!
Being chambered in .223 Wylde this is a better buy than the M&P or Ruger 556. After a couple hundred rounds of playing around and a good barrel clean, I was getting 5 shot groups at 100 yds of about 2%u201D. This was just some random cheap ammo I had around. Hand loads should bring this rifle to shoot a lot tighter. Bought it for the barrel but love this rifle overall. The rear flip sight is a little unique, maybe savage in house, but perfect for this rifle which deserves a nice scope.
Reviewed By: Larry D on 08/02/2018
Rating:     4 of 5 Stars!
This rifle has been my first and only experience in the AR15 world, and it's been an excellent one! I've only had it out a couple times to the range and only put about 50 rounds through it total. Two of my friends have AR's as well, and insist they're capable of handling sustained rapid fire for dumping a magazine with no issue...I know how damn hot high powered rifle rounds can make a gun/barrel and I'd like to keep mine accurate and functional as new for years to come, so I disagree with their gung-ho logic. Savage has made an excellent firearm in the MSR, as they have, in my experience, with all of their guns and they definitely deliver on the slogan in this case- "Savage: the definition of accuracy!"
Reviewed By: Justin W on 06/20/2018
Rating:     5 of 5 Stars!
This was my first AR, and all I really had to do was change the stock for $50! I bought it for $502 from Buds right after they came out so I definitely came out like a bandit... I threw a $230 1.5-6x32mm Weaver scope ontop, and that was the only "expensive" accessory! This is now a perfect AR for approximately $800 with scope & all of the accessories! Yes, you could get a S&W M&P15 for close to the same, but would it be as good as a Savage? I don't think so... I was shooting while standing at an indoor range, and I put 30 rounds to the head & 30 to the chest that were the size of a softball, so that 5R rifling is DEFINITELY worth the money! I also replaced the plastic handguard with a steel one so it looks like a Savage Recon, but with a 9" handguard; not 13" one... I didn't buy it at Buds; it was Guns America in OKC in 1997, but I got a Savage 112BVSS .300 Win Mag for $520!!!!! You can't touch that same rifle for under $1,000 now... God, Savage makes the most accurate rifles! That badboy can put 5 shots ALL touching each other at 100yds (1/4 MOA), too... WoW, Savage makes the most accurate rifles!!!!! This isn't an AR, but if you want an AMAZINGLY ACCURATE rifle for $800, then get the Savage 10P/12FV for $450-$550 and then put a SWFA 10x42 ($299) scope on it. Me, I put a Leatherwood 8-32x50 scope on my 112BVSS for $179, and that's an awesome scope! In my opinion, but a fixed 10x is better than an 8-32x50! I just didnt feel like spending the extra $100 on the SWFA. The Leatherwood 8-32x50 got famous in Vietnam; it's a very well built optic! Its not "military grade," but it's still a very good scope! All I own are Savage rifles! Handguns? Sigs & Springfield's, and then a Mossberg 500 shotgun was my FIRST gun! BUT, YOU'LL NEVER GO WRONG WITH A SAVAGE!!!!! I guarantee it ;-)
Reviewed By: Louis G on 06/14/2018
Rating:     5 of 5 Stars!
Super fun gun to shoot. It is very steady.
Reviewed By: John C on 05/31/2018
Rating:     4 of 5 Stars!
I bought the Savage MSR Patrol a few weeks ago and it came very quickly and seemed to be in perfect condition.I fired about 200 rounds of .223 and the buttstock adjustment button broke off of it. The buttstock slipped completely off and the spring came out of the buffer tube. This was the first time I ever shot the rifle and to be honest I was very disappointed in the Blackhawk furniture on it. It seems to heat up quicker than I expected also compared to other AR-15 platforms that I've shot. Overall I am happy because I'm able to fix the butt stock with materials I have here, but I expected a little bit more on the furniture and the rear pop up peep sight leaves a little to be desired also. I still really like the rifle though.
Reviewed By: PAWEL T on 05/22/2018
Rating:     5 of 5 Stars!
Great rifle for price. Accuracy are right with Savage name. Even with my not so good skills I put easy 5 son less than 1inch group. Put on it very cheap Monarch ammunition in steel cassing no problem whatsoever. Better ammunition fly like a champ. Just need get better with my accuracy over 100 yards. Happy buyer for my sport targets.
Reviewed By: Radoje S on 04/12/2018
Rating:     4 of 5 Stars!
For the price I think this is one of the better entry-level AR rifles on the market right now. Accuracy and reliability have been perfectly acceptable for a rifle with a stock trigger and non-free floating handguard. The Blackhawk! stock and handguard are "meh", but easily and cheaply replaceable.
Reviewed By: Jantsen T on 03/28/2018
Rating:     5 of 5 Stars!
Great quality rifle and accurate. Worth the money
Reviewed By: Monty S on 12/16/2017
Rating:     5 of 5 Stars!
This is my 3rd AR.. Its great!! Super accurate. 10/10 would shoot again.
Reviewed By: Robert B on 11/30/2017
Rating:     5 of 5 Stars!
The usual excellent service from Buds, probably my 10th purchase no problems....ever. Now on too this new to the market but well built weapon. The sights leave a lot to be desired which isn't an issue as it will be scoped but I really like the heavier profile barrel and 5R rifling and the mid-length gas system. The MSR has a really light recoil pulse and is very easy to keep on target, shoots very well and the light weight even considering the heavier barrel is great. Savage Got this AR correct !
Show More Reviews

20 Customer Reviews
Average 4.8 out of 5
View All Product Reviews