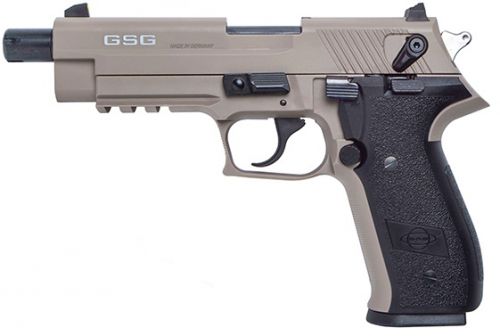 Layaway AvailableLayaway is Available on this Item.
Retail Store Availability
*Please Note!! Many of our pictures are stock photo\'s provided to us by the manufacturer and do not necessarily represent the actual item being purchased. Please verify this picture accurately reflects the product described by the title and description on this page before you place your order.
American Tactical Imports GSG FIREFLY HGA .22 LR 4 Threaded Barrel TAN 10RD

I bought this piece as a low-cost plinker. It looks cool and has great ergo, but that's where the good stuff ends. It's hard to get through a couple of mags without a misfire, stovepipe, fail to eject or some other malfunction. I've put about 500 rounds through this handgun with about a 5% malfunction rate. I read the specs to only use HV .22 ammo and the slowest I've run is CCI 1235fps. So far I've had the best luck with Federal 40 gr, 1240 fps., but it, too malfunctions regularly. I recently ordered 250 rounds of CCI Stinger 32 gr, 1640fps hoping that will run, but it hasn't arrived yet.
In short: Looks and feels good. Runs BAD.
David M on 01/25/2020
Rating:   4 of 5 Stars!

I am loving this little gun. It's got a nice feel to it right out of the box. I have small to medium hands and the Firefly fits me like a glove. Heavy, but not too heavy. A on the ergonomics.
It's a handsome gun too, two tone finish and cool looking, CZ-ish in design. A on looks.
Now...as far as shooting goes, be patient. The gun will balk at cheap bulk boxes at the get-go (mine hated Federals) , and I never could get the factory-installed spring to shoot standard velocity. (But that was never an issue with me. If you are a standard velocity ammo person, well maybe this ain't the gun for you. Moreover, GSG does include an extra spring for standard velocity, which I've never tested out.) I broke the gun in by feeding it super-fast stuff at first (Velocitors), then kicked it down a notch to the 1230-1260 mini-mags range. After that, the gun will shoot virtually ANY hi-vel quality ammo in Bulk boxes like Winchester, Fiocchi, Blazer (in fact ANY CCI hi-vel product). After the break-in period of 250-300 rounds), A on performance.
Gun has accurate sights too.
I would recommend this gun to anyone.
Melvin R on 02/06/2019
Rating:   5 of 5 Stars!

I really want to like this pistol so bad, but it makes it hard to be liked. First, Buds was great at shipping and I had no issues with my FFL dealer (DTS Tactical Moss Bluff, LA). It has an acceptable fit for me, and I have small hands for a guy. But I can see how those with bigger hands will have some issues. There's not much room inside the trigger guard when in double action. With small hands, it fits just fine, but I would have problems if I wore gloves. For bigger hands, they might find it a little more difficult. The double-action pull is also ridiculous. If I recall from my limited research, it's about a 8 pound trigger pull, but it seems like it is more. The single action is alright, but I have had better experiences with 1911s and striker fired pistols as opposed to this single action. It comes with different springs that are to be used as according to the ammo that is used. I used the lighter springs with the intention of using cheaper ammo. It did not perform well. I'm hoping I can use some higher quality ammo with this pistol and get better results. We'll see. I will say that I would not recommend this pistol to a first time shooter. It is a bit cumbersome and picky, and there are plenty of pistols out there that would be better for a first time shooter to have a better experience.
Michael S on 09/25/2018
Rating:   4 of 5 Stars!

This gun is very well constructed - looks just like a Sig Sauer P226, only about 20% smaller. Very accurate. Easy to breakdown. Only word of caution i have is regarding the cycling of ammo. It is very finicky. I started with using Winchester WildCats and the gun stoved or jammed after every shot. I then polished the feed ramp, but still had the issue. I then used CCI Minimags, whiched worked perfectly. I put 100 rounds through the pipe and then switched to Winchester for another 10, and I had no issues. Later, I returned to the range and attempted the Winchester again and had a jam after every shot. I watched a BudsGunShop video on this gun and it strongly suggested putting CCI Mini Mags or comparable through the gun for a while before trying other ammo, so I am still working on getting the gun broken in to where it will use anything else.
John C on 08/07/2018
Rating:   5 of 5 Stars!

Since I own the GSG 522SD Tactical 22LR rifle I figured this would be nice addition. Service at Bud's was awesome and there were no hiccups. Took it shooting twice and have to say my son was the one who shot it and he loves it and named it Sophie. Wish it came with 2 mags and not one as most come with 2. Had a few hiccups but it's mostly due to mag and type of rounds such as Standard vs High Velocity rounds. I would recommend it.
Show More Reviews Write Review