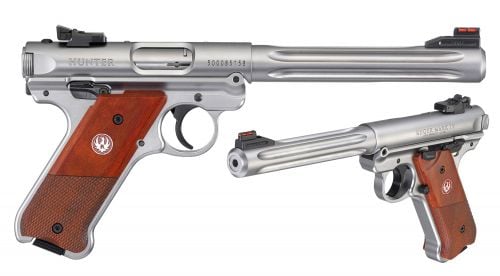 Few firearms are as instantly recognizable as the Ruger Standard. Introduced in 1949, it remains today one of the most popular rimfire pistols ever produced. This is one of the latest variations, the Mark IV Hunter, designed for competition, small game hunting, and varminting.

Few firearms are as instantly recognizable as the Ruger Standard. Introduced in 1949, it remains today one of the most popular rimfire pistols ever produced. This is one of the latest variations, the Mark IV Hunter, designed for competition, small game hunting, and varminting.

Eugene B on 03/29/2022
Rating:   5 of 5 Stars!
Review is way over-due. Purchased item back when it was readily available. Ordered the Ruger Mark IV Hunter and had NO problems with order/shipment from Bud's Guns. I was able to receive my gun from a local FFL and on the date originally set. A BIG THANK YOU, to Bud's Guns.
Michael M on 01/12/2021
Rating:   5 of 5 Stars!

Bought this several months ago and have just been putting it through it paces. I'd say it took a little while to break in properly but after about 100 rds it fed pretty reliably. It is a gorgeous gun and the ease of the breakdown is awesome. Accuracy is great. It just has a lot of cool factor going for it.
Michael I on 10/07/2020
Rating:   5 of 5 Stars!

Received the gun Quick & fast. I have no complaints of order and shipping. Only complaint I do have when I got the Hunter MK IV the pistol had issues. The rear site was not centered and could not be moved to the center position so you could be on target. 10' to 13' from target , gun was still 3-5 inch off center. I question and told Buds but had to send gun back to factory myself. Honestly felt in this case I would had thought Buds would have assist me with the problems I was having. I did send Hunter MK IV back to factory and Ruger made the Gun 100% . Now the Hunter shoots as a Hunter should. The Gun very good gun. I cannot say the same for Buds for I had no way of knowing Gun has issues when I picked it up FFL Dealer. Buyers Beware. Product is 5 Stars
Shawn M on 05/19/2020
Rating:   5 of 5 Stars!

Purchasing the Ruger Mark IV Hunter was done without any problems. Bud's Guns did a very good job to insure the process went smoothly. I was able to receive my gun from the FFL on the date stated and even that process went well with no surprises. I will definitely refer my friends to Bud's Guns for all their needs.
Ben E on 12/27/2019
Rating:   5 of 5 Stars!

It's undeniably well made and will be more accurate than I am. Knowing that the Ruger Mark IV line was easy to take apart to maintain, as well as having a desire to practice shooting with cheap .22, this was a perfect choice for a pistol to practice with.
I only have two things that I am not the happiest about with the MkIV Hunter:
It's heavier unloaded than a fully loaded Glock 19. I shouldn't have been surprised by this as it's basically a block of steel than got milled. The extra heft made aiming a bit more tiring over time than I had thought it would.
The front sight managed to unscrew itself a little around 300 shots in on the first time I took it out. I had to borrow someone else's hex key to keep going until I got back home to my own tools. A small complaint and certainly an unlucky exception, though still disappointing.
Overall, combined with cheap .22 ammo, this is going to by my first choice to go to the range with for years to come.
Dwaine W on 11/25/2019
Rating:   5 of 5 Stars!

Super awesome and accurate target pistol.
Best looking .22LR and easy to teardown and clean.
I did need to loctite the grip screws and sight mount screws after they came loose on a friend's MK IV Hunter so I did mine before going to the range.
No problems. Fit and finish are great.
Joseph K on 10/10/2019
Rating:   4 of 5 Stars!

I've not put a ton of rounds through this, but it is clearly a range gun build so I feel I can review it.
Everything on this pistol is excellent with one exception. The solid steel construction, the grips, etc. Its accuracy is better than my skill to shoot and only hindered by... the trigger.
The trigger is rather mushy for a single action only design. For the style of pistol I found it to be disappointing. I'm sure it can be refined with some after market stuff but for the price on a 22 LR pistol I expected it to be target shooting perfect.
But I'd buy the gun again, I'm certain I can resolve the trigger issue on my own and everything else with this pistol is so top notch.
Ike S on 07/30/2019
Rating:   5 of 5 Stars!

Had the Mark III same barrel loved it, as everyone did not like the field strip, was pretty good at it but when I did not shoot for a few months or more had to go back to you tube to refresh my memory so I bought the Mark VI guys and girls its top shelf now I like it so much we shoot it more, even though we shoot a lot of 9mm,its tack driver for sure, Thanks again for Buds great service.
Dennis C on 03/13/2019
Rating:   5 of 5 Stars!

I was getting ready to write about my beautiful new Ruger Mark iv Hunter and how quickly it arrived at my FFL dealer, and then I saw that the price of the Hunter today was 567.00. That's just great. A couple weeks ago I paid 631.00. You could have let me know that waiting would save me 60.00. Dennis Callahan
Show More Reviews Write Review