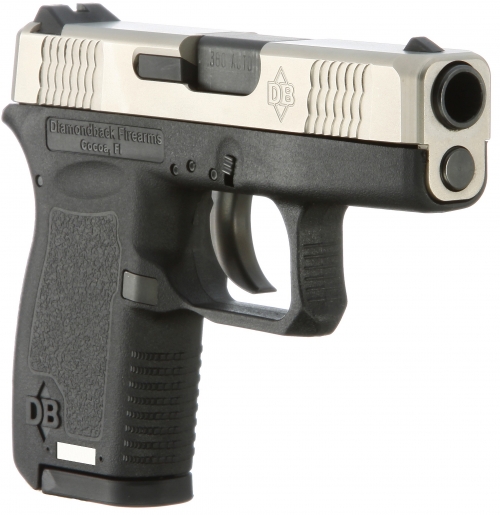 Diamondback Firearms is proud to present the DB380. A micro-compact .380 automatic pistol made entirely in the USA. Designed with safety in mind, the DB380 features a "ZERO-Energy" striker firing system with a mechanical firing pin block, a steel magazine catch to secure a sheet metal magazine and real windage-adjustable sights, all in a lightweight pistol.

A steel trigger with dual connecting bars allows for a crisp smooth, trigger pull. The DB380 features a FEA (Finite Element Analysis) designed slide and barrel that is stronger than any comparable firearm, resulting in durability with less felt recoil, and the absence of removable pins or tools makes field stripping easier than ever. The slide, barrel, and internal parts are coated to resist corrosion, making this pistol a lifetime investment.

Diamondback Firearms is proud to present the DB380. A micro-compact .380 automatic pistol made entirely in the USA. Designed with safety in mind, the DB380 features a "ZERO-Energy" striker firing system with a mechanical firing pin block, a steel magazine catch to secure a sheet metal magazine and real windage-adjustable sights, all in a lightweight pistol.

A steel trigger with dual connecting bars allows for a crisp smooth, trigger pull. The DB380 features a FEA (Finite Element Analysis) designed slide and barrel that is stronger than any comparable firearm, resulting in durability with less felt recoil, and the absence of removable pins or tools makes field stripping easier than ever. The slide, barrel, and internal parts are coated to resist corrosion, making this pistol a lifetime investment.

Bought for wife as a purse gun. Small compact and lethal, just like her. Fits perfectly in there. Very accurate. Bud's comes through as usual.
Milton Y on 12/21/2018
Rating:   2 of 5 Stars!

Well I’ve never had a gun fall apart just from cleaning it but this one did. New from box I cleaned the firearm. While cleaning slide I noticed paper thin plastic scabs under front sight. A gentle rub removed them but also caused the front sight to fall out. It seems the sight is only held on by melting the sight mount posts it may work if there were more plastic melted but then of course you’d be dealing with barrel tolerances. I ended up just removing the rear sight too since one of the white dots was hardly there anyway. Haven’t shot it yet, just wanted to warn people. There’s a reason it’s so cheap. Hopefully it can at least go ‘BANG!’
Kurt M on 12/21/2017
Rating:   1 of 5 Stars!

This is a firearm I really wanted to like and carry; but not one of the 5 that I have owned in the last 4 years has fired consistently, or not jammed or would feed at a 100% rate. Call me stubborn but I kept hoping for a reliable DB. This was the last one I will purchase. Great price, great weight, liked the looks and size, but just not dependable enough to bet my life on it.
Gary L on 08/09/2017
Rating:   5 of 5 Stars!

I purchased this gun as a light weight pocket carry, and I am very pleased with my purchase so far. I have only shot about 6 magazines out of it, and used 4 brands of ammo, ranging from flat nose Winchester to round nose Magtech, PMC, and Remington, and it has not had one hiccup at all. I have not tried any hollow points in it yet to be honest. I will try that next, but the manual says to run 50 to 100 rounds thru it for break in. I have not used steel cased or aluminum case ammo, so I do not know how that would perform... Great purchase, and I would recommend this gun. The slide does have a stiff spring, and anyone that has a strength issue may find it difficult to rack the slide.
Lonny T on 04/12/2017
Rating:   4 of 5 Stars!

Great little gun for the price thinking of picking up another for the hell of it. Thanks Buds! Once again a satisfied customer
Edward B on 04/11/2017
Rating:   4 of 5 Stars!

There are a lot of negative reviews for this gun and admittedly it is one picky beast. However, with a few small mods and discernment with ammo purchases it is an amazing little pocket gun that I have to be very accurate, simple to shoot (as long as you don't limp wrist it) and very dependable. You must (to avoid most feed issues) remove the barrel and polish the feeding ramp. I used some good old fashion Mothers Gold car polish and a Dremel polishing tool. Polishing the ramp to a high sheen and further removing any rough edges around the feeding ramp eliminated almost all of my problems. There are some ammos that it won't take...most of which result not in a FTF, stovepipe, etc., but rather have a light strike on the primer. Other ammos are just horrible in about any weapon except for my Beretta 92, which seemingly will shoot rocks if I put them in it. Tula Ammo? Don't even try it. It locked this gun up so tight I thought I would never get it to work again. Most important here, however, I have put five different types of Home and self defense ammo through it (higher quality ammo) and it has never failed. The price is right and if you are willing to listen to the advice out there and do the modifications then you are getting a great gun for a ridiculously low price. Soon I plan on buying their 9mm.
William S on 11/26/2016
Rating:   5 of 5 Stars!

Great shooting little gun. So light you barely know you are carrying it and not the expected recoil from a featherweight firearm. Very pleased with purchase and Bud's was a pleasure as usual.
Ken F on 06/05/2013
Rating:   5 of 5 Stars!

Great little pocket pistol for CCL holders. I use this pistol during hot months in the south because it fits nicely in the pocket of my cargo shorts with no printing. Probably good for a ladies purse as well. I had considered a Luger LCP as an alternative to this gun, but happy I picked this one. It is a little lighter and thinner. Recoil is less than you'd expect for a pistol that is about the size of a big hand. The .380 caliber will provide plenty of stopping power if needed. One issue I did have with it was a number of FTE issues as I was breaking in the pistol - with Russian ammo. However, after about 100 rounds the problem seemed to work itself out. Great gun for the price. Comfortable and light to carry - which makes it useful. No gun will help you if it stays in your safe because you hate to carry it!
James C on 11/03/2011
Rating:   5 of 5 Stars!

After first range session I could not be happier. Ran 160+ rounds through it with various FMJj., Magtech, PMC Bronze, Blazer aluminum without a single malfunction. Very comfortable to shoot well balanced and recoil was much less than I anticipated. Was able to shoot good goupings after getting adjusted to the sights. Mine has a later serial number which I was glad of. I think Diamondback has the problems worked out on these little pocket rockets. I would buy again.
Show More Reviews Write Review