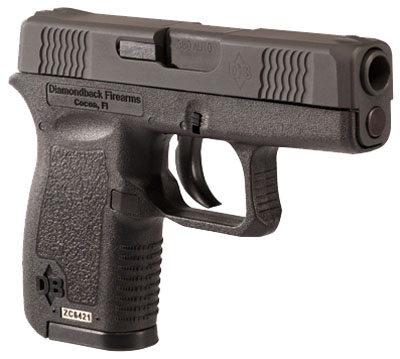 Diamondback Firearms is proud to present the DB380MS, a micro-compact .380 automatic pistol made entirely in the USA.

Please note, the video below is a generalized video of the DB380 model. The firearm we are selling has the low profile machined sights not white dot as in this video.
­

***This is a special order item which may cause a slight increase from our standard processing and shipping times.

Diamondback Firearms is proud to present the DB380MS, a micro-compact .380 automatic pistol made entirely in the USA.

Please note, the video below is a generalized video of the DB380 model. The firearm we are selling has the low profile machined sights not white dot as in this video.
­


­
*Special thanks to Nathan and the guys at Lanco Tactical for this video*
Top 14 Similar Items
Only Diamondback Firearms | Sort by: Most Popular | Lowest Price | Highest Price

Bought the Diamondback aone wrap months back and let it sit a bit before I fired it. During the time it sat, I spoke to a few "informed" people about the Diamondback and they all trashed it. So the next stop was the range and, low and behold, the gun Mis-fired about 20% of the time. I thought maybe I was having a bad day and let the gun sit another few weeks and tried again. This time almost 30% Mis-fire. Now I am pissed. I got in to a Live Chat with Buds and was informed that the warranty traveled thru the manufacturer. The guy I chatted with emailed me all of the contact info I needed to reach Diamondback directly. I called a guy named Scott at DB and he quickly realized what the issue was- "light striking". He asked for my email address and he sent (within 4 minutes) a pre-paid UPS label so that I could send the gun back.the email came with complete instructions on how to send the gun back. Only thing I paid for was the box to ship it in. Scott also mentioned that while the gun was there, they would update it to make sure it was up to speed with the latest edition. Within 8 days I had the gun back. Clean, oiled and with a new lock- they had a sleeker version then the one I had. Took the gun to the range and put 50 rounds thru it without a single Mis-fire. She is now my new best friend! So overall , I am very happy with the gun, Buds and Diamondback. To those tools that trash Diamondback, I say, give them a try.
Jm S on 07/25/2012
Rating:   2 of 5 Stars!

Thanks Bud for the great service as usual. I'm very impressed with the DB380, very light weight and well balanced. The first shot failed to eject the casing properly but after that the pistol fired flawlessly. I would recommend Diamondback pistols. I am very pleased with my purchase.
Micheal L on 05/25/2012
Rating:   5 of 5 Stars!

Great pocket pistol! I own 4 different brands of pistols and this is by far my favorite pocket rocket. I own the PF-9, LCP, TCP and DB380 and this one has the best grip and handling of all of them. the sights are awful and sooooo bad compared to the others but it more than makes up for it in every other possible way. Great shooting gun and I LOVE the Glock like styling :D
Bj O on 03/08/2012
Rating:   5 of 5 Stars!

Now that I've owned this gun for several months, I'm ready to write a review (unlike some who give a "valuable" review before they even fire their gun). In short - it's great. NO failures, ever. Right out of the box, I put 20 rounds of Fed UMC 115 gr MC through it. Stripped, cleaned & lightly oiled it, then shot another 100 rounds of the same, then 20 rounds of Hornady 90 GR FTX. No failures to feed, fire, or eject. The felt recoil of this gun is great. I own other small .380's which hurt my hand after shooting 100 rounds. In contrast, the DB380 is a pleasure to shoot (given that it's so small). The sights, if u want to call them that, are poor. However, I was able to manage fair accuracy at 7 yards using them. You can buy a version of this gun with better sights, but I wanted mine to be as small, light, and "snag free" as possible. Given that, I'm fine with the sights. It feels solid. While I have sometimes avoided carrying a gun because it was too big or heavy, this DB380 can be carried all day and you'll barely notice it. I'm very pleased with this gun.
Zelig K on 12/28/2011
Rating:   2 of 5 Stars!

The video comparison should be removed. The sights ARE NOT what is shown in the video comparison. They are similar to the Ruger shown in the video.If I had known that I wouldn't have purchased it. Mine also misfired literally 90% of the time. Either it wouldn't eject properly or it would fail to chamber the next/first round. The gun had virtually no oil it in and I believe that was the problem. I oiled it good when I got home; so, next time around we will see if it shoots without malfunction.
John N on 12/15/2011
Rating:   4 of 5 Stars!

The sights on the DB 380 that I just picked up ARE NOT what is shown in the video comparisons with the Ruger 380 or as described in the information block when ordering. They are non adjustable and not 3 dot sight as shown in video.
John C on 11/23/2011
Rating:   5 of 5 Stars!

I purchased this gun from Buds a few weeks ago and so far I have fired 200 rnds through it. Out of the 200 rounds I experienced 8 malfuctions, all while using Winchester White Box ammo. It will shoot all other types of ammo without a problem to include HP. I broke this gun in using PMC Bronze ball ammo and it was a very smooth operating pistol. The last 40 rounds I put through this DB380 were Remington HP and it worked great. This gun is incredibly accurate and very comfortable to shoot. This model DB380MS has been discontinued which allows it to be sold at this low price. Its the only model DB that has machined sights and the magazine is not engraved to read DIAMONDBACK. Other than that its the same quality weapon which for me has been worth every penny. John C. VA
William G on 11/03/2011
Rating:   5 of 5 Stars!

My very first order from Buds and it was fantastic! Ordered BD380MC. Good little CCW to carry. Fits in my large hand and it is comfortable. Have not test fired yet. Plan to do this weekend. Will return with results.
Write Review