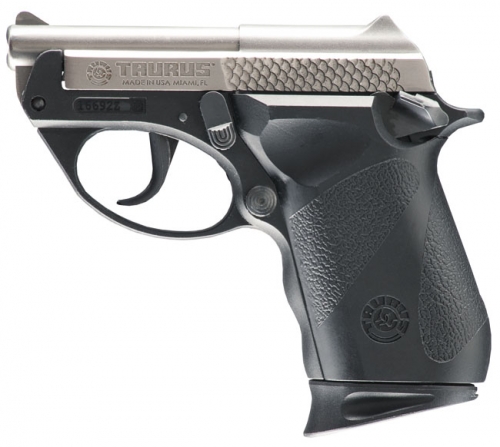 *Please Note!! Many of our pictures are stock photo\'s provided to us by the manufacturer and do not necessarily represent the actual item being purchased. Please verify this picture accurately reflects the product described by the title and description on this page before you place your order.
CHECK OUT THESE ULTRA-LIGHT SEMI-AUTOS The 22PLY and 25PLY have been redesigned with sleek new lines and a polymer frame-weighing in at a mere 10.8 ounces. Both feature a blowback action and tip-up barrel for safety and convenience during loading and chambering the first round. Blue or Matte Stainless finish. If light and fast are your priorities, the 22PLY or 25PLY are the pistols for you.

Layaway TB OnlyActive Team Buds Members are eligible for Layaway on Qualifying Orders which Contain this Item.
Retail Store Availability
*Please Note!! Many of our pictures are stock photo\'s provided to us by the manufacturer and do not necessarily represent the actual item being purchased. Please verify this picture accurately reflects the product described by the title and description on this page before you place your order.
Taurus 22PLYSS 22PLY 8+1 .22 LR 2.33"
CHECK OUT THESE ULTRA-LIGHT SEMI-AUTOS The 22PLY and 25PLY have been redesigned with sleek new lines and a polymer frame-weighing in at a mere 10.8 ounces. Both feature a blowback action and tip-up barrel for safety and convenience during loading and chambering the first round. Blue or Matte Stainless finish. If light and fast are your priorities, the 22PLY or 25PLY are the pistols for you.
Top 14 Similar Items
Exclude Taurus | Only Taurus | Sort by: Most Popular | Lowest Price | Highest Price

Franklin T on 05/24/2022
Rating:   5 of 5 Stars!
Finally made it to the range this afternoon... Just did an over all function test.. Put 5 1/2 mags thru it... About 50 rounds... 1 Failure to fire.. was not a gun issue.. Bad spot on the primer. I turned the round in the chamber... Fired just fine. Do some research.. Out of the box these are NOT very reliable.. Watch some videos that will help you get things going right. Mainly I think its a Mag issue. Not too loud. Very long trigger pull so will take some practicing. Price was right...Small/pocket 22's are nice to have around.. At best this is a 30 foot gun.. but I think it's going to take a great of practice to get to that point.. at least with my level of skill. As always, Buds order processing and shipping was excellent.
Eric R on 04/12/2022
Rating:   5 of 5 Stars!

I wanted a pistol that had a manual safety, was reliable, low cost, and fit in my top shirt pocket. The PLY22 fit the bill- nothing else did. I researched dozens of pistols and once I settled on the PLY22 I watched every youtube video on the gun and read all the comments and read all the forums talking about the gun. I decided most of the negative views of the gun came from users failing to use the gun properly. I have shot 300 rounds. In the second magazine shot, there was one failure to eject. I was probably limp wristing it and had my hand in the way of the slide. I used CCI minimags and made sure the gun was always clean. The slide is almost impossible for me to rack. I assumed other users had been exaggerating how hard it was. It did loosen up a little. A few people reported the pistol began firing automatically which is scary if true. However, so many people I saw who complained about the gun were admitting the gun was dirty, or they were using the wrong ammo or cheap bulk ammo. I have not had another pistol easier to take apart and clean or more fun to shoot. The fact it can fit in my top shirt pocket makes me even more happy. I wish it had a threaded barrel or the ability to install a laser. By the way, I did a detailed video review of the little guy on my YouTube channel at Robb's Homemade life and did a playlist of videos on the gun too. 18 reasons I bought a Taurus PLY22 Pistol & 10 bad ones not to https://www.youtube.com/watch?v=824HOIdc4Nw The pistol did not have any shortcomings I did not know about before buying so I give it 5 stars
Theodore T on 12/28/2021
Rating:   5 of 5 Stars!

Great pistol nicely finished put 300 rounds thought it with only one problem I think it was the ammo. Using Federal bulk lead 40 grain.
I like the conceal ability put in a good pocket holster easy to forget you have it. Wish I could buy some mags for it not available anywhere on the web.
I think it has to do with the high demand. Buds as always delivered in Pristine condition as always fast!
Frank M on 10/26/2021
Rating:   3 of 5 Stars!

5 star for buds always, quick shipping.. 3 stars for the gun itself bought for my wife and she thinks its ok took it to the range ran about 100 rounds through it failed to feed about 4 or 5 times its accurate up close up to like 20-25 yards other than that not really accurate. She cant really cock it back to load it im.guessing cause its still fairly new so she has to load it using the barrel spring. Nice lookin finish on the gun though. Not too bad. Could be more accurate though. Just my opinion of the gun
William S on 08/10/2021
Rating:   5 of 5 Stars!

This my second Taurus I have purchased. I bought one for my wife and then the second one for my daughter. The Tip Down barrel is what makes it easy to load,rack, shoot and clean. Working with Buds and my local dealer made the process very good.
Rodney L on 06/02/2021
Rating:   1 of 5 Stars!

When I received this hand gun I went to the shooting range the same day.
The gun kept jamming. The first three.magazines I shot the gun jammed four times. After further investigation a saw a pin was coming out of the slide. I returned it to Taurus for repair.
Ronald D on 05/30/2021
Rating:   1 of 5 Stars!

Ordered the Taurus PT22 form Buds and was shipped in 4 days to my local dealer. Buds is great, however, this PT22 is highly dangerous to shoot! Took it to the range first time and I could not pull trigger back to fire it after putting 1 round in the flip up barrel and 7 in the magazine. My son tried also countless times unloading and reloading according to the manual. Still could not fire! Then we took off the slide and checked internals and replaced . Still could not pull the trigger to fire. We were certain to have the safety in the red fire position also.
Finally we tried one more time and the gun fired....oh, yes did it !!!! Emptied the 1 in the barrel plus fed the 7 in the magazine in rapid automatic mode!!! 8 shots in less than 1 second. My son wished he had this gun in Iraq. We always maintain safety at the range and it was pointed at the target!!!!
To sum it up... I brought it home and took it apart again and added a little lubrication and put it all back together. It is dry firing as it should but I will have to follow up after I return to the range and give you any updates.
Use this gun very carefully and would not advise to buy!!!
Jan H on 05/27/2021
Rating:   2 of 5 Stars!

I'm surprised that so many people have rated this pistol highly. I want to like it, but after trying three types of ammo, I can't get more than 2-3 rounds through it without some type of jam, failure to feed, failure to eject, misfeed, etc. It's dangerous. I'm looking forward to trading it in. I recommend you put a few more bucks in and go with one of Bud's other fine choices!
Show More Reviews Write Review