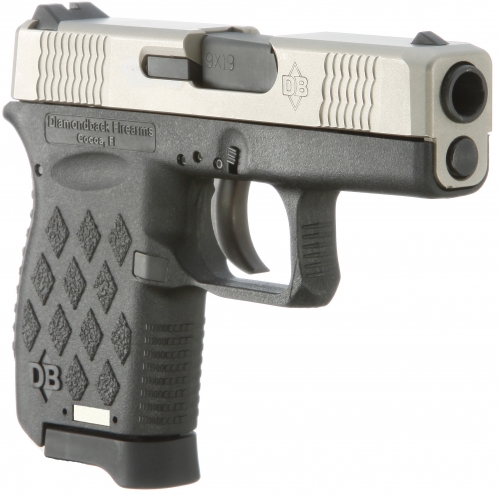 Ordered this to replace my summer carry CT380 the wife confiscated for herself after our last trip to the range. When searching for a replacement, I found I could could carry a 9mm in a package a tad smaller and roughly the same weight as my 380. It arrived quickly to my preferred FFL, from there I headed right to the range. I ran 4 mags through without a hiccup. That was about all my hands could take. After about two mags, the back strap stippling was clearly indented in my palm, ran another 2 mags through with gloves on. Since then I have roughly another 100 rounds through (mix of cheap F&S 115 9mm FMJ and Rem UMC 115 JHP) without any issue, other than beating up my palm. I have to run another 200 rounds to run through before I would depend on it as a carry gun, but I am really impressed so far for the price. Definitely not a range gun, but in that moment of need, I doubt you will notice the palm punishment. Added a Hogue 18500 grip sleeve, which helps quite a bit. The gun pictured appears to be a gen 2, but the one I received was a gen 3 I believe with the wider slide serrations.
Joe J on 12/19/2018
Rating:   5 of 5 Stars!

Buds is awesome! DB9 arrived very quickly to my Local Gunshop. Thank you Buds! This is my 2nd DB9 and you will not find a better 9mm pocket pistol. One by my bed and one stays with me all the times! Very accurate and eats up every 9mm round I’ve put through it. For the price you can’t go wrong!
Dan C on 03/02/2018
Rating:   5 of 5 Stars!

This is a great, reliable, accurate little carry pistol. I have loved Diamondback firearms since the release of their first gun (db380) back in 2009. The db9 is my everyday carry. Buds was great in their delivery, and their customer service is second to none.
Greg S on 07/25/2017
Rating:   5 of 5 Stars!

The DB9 is a good buy for what it is. The grips on this second generation feels so good in my hand(I have big hands) im a big guy, i know there alot of bad reviews from guys who shoot 500 rounds or a million round's through the gun, but lets be honest im not goint into war with a DB9 on my hip lol, its not a glock, it's a surprise in my pocket i have shot about 40 rounds of hollow point i have had no jams what so ever, When you buy it you have to clean it up good before you put any bullets in it... I have my ccw & I love my DB9 for what it is Pocket Rocket...
Timothy W on 05/21/2017
Rating:   5 of 5 Stars!

I finally got the chance to shoot this gun, I received it two weeks ago. Yesterday while teaching a firearms class I was able to fire a few rounds down range. I purchased this gun as a pocket carry, and after yesterday, I can carry it with great confidence, I was using plinking ammo, the weapon fired flawlessly, without a hickup, three magazines, rapid shooting approximately 50 yards just to check it out, and still about a 10 inch group. Pretty good for such a small weapon. Great Product.
Dave E on 04/01/2017
Rating:   5 of 5 Stars!

One of my favorites. Had some feed problems until I replaced the mag spring with one from a Kel-Tec PF9. Had to cut off an inch to make it fit but it's a lot stiffer now and the rounds haven't nose-dived since. But I have another without that mod, and the rounds never nose-dived. Not sure why one would and one wouldn't. It will take more time to compare the two. Occasional feed problems but mostly new shooters limp-wristing. Overall, I really like this model and would recommend it for all but target shooting. It's a good, accurate defense gun once you find the ammo it likes. (Mine like IMI die-cuts.) It's just so small the explosion is literally right in your palm. Not as comfortable as the Shield or even a Cobra Patriot, but fits in the pocket much easier. Just get used to it before you need it. Lots of practice and its easy to control. Probably will need a few trips to the range since you can't just sit and shoot this one all day without tiring quickly.
Christopher L on 02/21/2017
Rating:   5 of 5 Stars!

I love this pistol. I have about 150 rounds through it. I only had 2 failures to feed, and those were is the fist 2 clips. Warning, this is not a target pistol! It will wear you hand out (dont let this be the first gun your wife ever shoots, cuz it might be the last). This gun was made for deep, yet powerful concealment, and it works well in that role as far as I am concerned. I carry it in scrubs in a family practice health clinic, and there is no way to tell I am armed. That is hard to do in scrubs. This gun is accurate, and appears to be well made. I would recommend this gun to anyone who needs to conceal with limited clothing options, as long as they are not recoil sensitive.
Show More Reviews Write Review